Are you living your life to the fullest?

All human endeavors and achievements would prove meaningless and in vain if one fails to satisfy the very reason for his being: to possess reverent fear of God and to keep all His commandments

A PERSON’S NET WORTH, in financial jargon, is defined as his total assets minus liabilities. Nowadays, that is usually how an individual’s value is assessed: in monetary terms. Interestingly, a similar standard is used by the society-at-large in gauging one’s success in life: how much wealth he has amassed, his level of education, or the fame and influence he enjoys.

Those who have acquired a considerable amount of those things are generally regarded as having lived their lives to the fullest, or whose earthly existence had been truly productive and worthwhile. Conversely, those lacking such mundane accomplishments are largely viewed as miserable and their life a failure.

But should one’s accomplishment in life and worth as a person be measured through the prism of a materialistic world? If a person, let’s say, had been poor all his life with scant or no education at all, does that make his earthly existence downright empty and meaningless? And does his lack of worldly qualities diminish his worth in the eyes of the Creator?

When can we truly say that one has lived his life to the fullest?

A man of notable accomplishments
Consider this account of someone who, in worldly standards, achieved such in his lifetime:

“I accomplished great things. I built myself houses and planted vineyards. … I also piled up silver and gold from the royal treasuries of the lands I ruled. … Yes, I was great, greater than anyone else who had ever lived in Jerusalem, and my wisdom never failed me.” (Eccles. 2:4, 8-9 Good News Bible)

These words are attributed to King Solomon, during whose reign Israel reached its golden age—a period of relative peace and prosperity. He testified how he accomplished great things: he piled up riches and gained wisdom and power. In the eyes of many, he was an embodiment of a very successful individual, someone who had lived his life to the fullest. As such, he must have been very content and happy. Well, was he?

This is what King Solomon admitted, thus:

“So I came to regret that I had worked so hard. You work for something with all your wisdom, knowledge, and skill, and then you have to leave it all to someone who hasn’t had to work for it. It is useless, and it isn’t right! You work and worry your way through life, and what do you have to show for it?” (Eccles. 2:20-22 GNB) 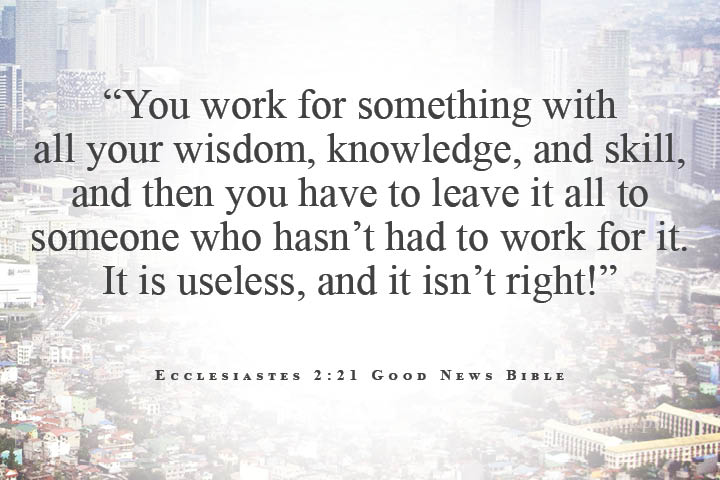 Despite all his earthly accomplishments, Solomon lamented that all his toils had been useless or in vain. Why did he say that? What did Solomon realize as the ultimate meaning and purpose of life? He declared, thus:

“Let us hear the conclusion of the whole matter: Fear God and keep His commandments, for this is the whole duty of man. For God shall bring every work into judgment, including every secret thing, whether it be good or evil.” (Eccles. 12:13-14 21st Century King James Version)

After making a mental inventory of all his accomplishments and later realizing that all were in vain, King Solomon concluded that the whole duty of man—that is, the very purpose of his existence—is to fear God and obey His commandments. This is because in the end, God will hold every man accountable and bring him into judgment based on the works he had done—whether good or evil.

A world that leans toward materialism
This truth, sadly, is what many people have overlooked. The world has become so money-oriented that a person’s worth is usually measured in terms of how much savings he has in the bank, the type of car he drives, how big his house is, which university he attended, and so on—that attainment of these things is what makes him truly successful and accomplished.

But as the Bible teaches, all human endeavors and achievements would prove meaningless and in vain if one fails to satisfy the very reason for his being: to possess reverent fear of God and to keep all His commandments.

Let it be clear though that to seek material prosperity, knowledge, or power per se is not forbidden by God. In fact, He is never against people acquiring those things, inasmuch as it is also a manifestation of His blessings. Nonetheless, man should not focus only on the procurement of earthly things to the point that he fails to fulfill his duty to the One to Whom he owes everything. 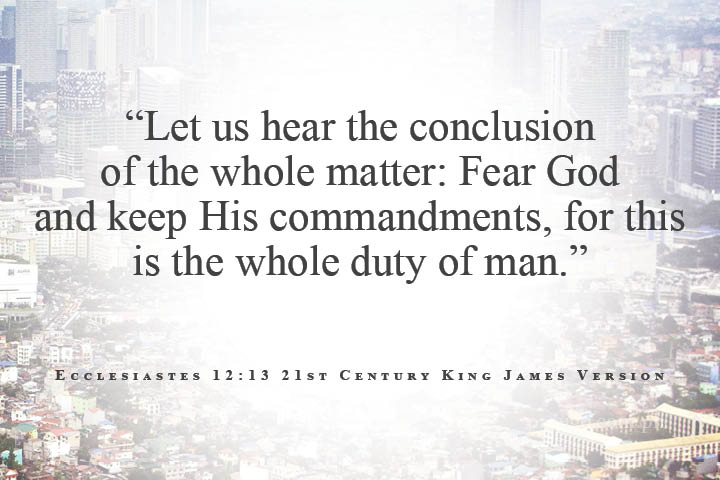 However, some say that although they do recognize that it is their obligation to serve and obey God, nonetheless for now, they want to concentrate first on making their lives comfortable so they would have all the time and resources they need to serve God later on. In other words, in their order of priority, serving God takes a back seat. What they focus on more are the material things that they think make living more comfortable and easy.

But, should we put off fulfilling our duty to the Lord God? The Bible tells us this:

We are exhorted to remember our Creator while we are young, that is, while we still have our life and strength. In the order of priorities in life, then, this should be on top of the list. And we should do this with a sense of urgency. Reality dictates that, sooner or later, nature will take its toll: we will get old and frail, the strength of our body will fade away, and our health will deteriorate. Thus, we should remember our Creator now that we still have the chance. 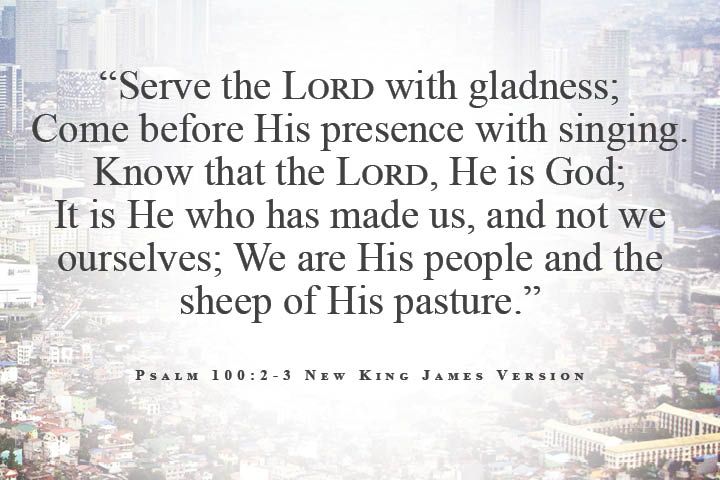 Man’s fundamental obligation
What does it mean to “remember” our Creator? The Bible elaborates, thus:

“Serve the LORD with gladness; Come before His presence with singing. Know that the LORD, He is God; It is He who has made us, and not we ourselves; We are His people and the sheep of His pasture.” (Ps. 100:2-3 New King James Version)

It is man’s inherent duty to know or recognize his Maker. But how does he prove it? Apostle John provided the answer, thus:

Knowledge or recognition of God is demonstrated by obeying His commandments. Someone can say a gazillion times that he knows God but if he fails or refuses to obey His laws, such person is nothing but a liar.

In the eyes of our Creator, this is how our true “worth” is measured: not by how much material possessions we have, but by how faithful we are in keeping His commands. A person may be lowly in the eyes of society, his existence may be regarded as trivial and inconsequential, but if he devotes his whole life in serving the Lord God and in obeying His commandments, then he is most precious in the eyes of his Maker because he was able to satisfy the reason for his being by fulfilling the “original purpose of his creation” (Eccles. 12:13 Amplified Bible)—to have reverent fear of his God and obey His commands. 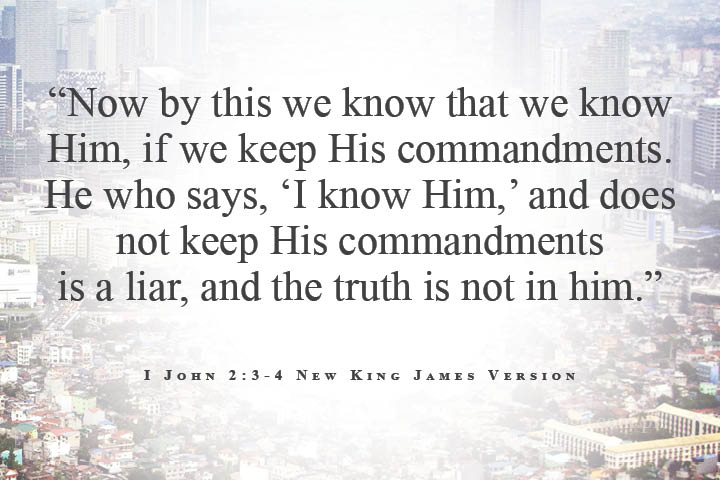 Do not envy the wicked
Perhaps there are those who feel dismayed and frustrated that their hope of an ideal life—a life of comfort, prosperity and security—has remained elusive. Others may even evaluate themselves and their lives as utter disappointment for failing to reach the so-called pinnacle of success, that is, the attainment of fame, fortune and power. But should they feel that way? Should they consider their lives spent in vain simply because they did not acquire those worldly traits? Should we, in any way, feel envious of people who may have accumulated earthly possessions, and yet have lived in reckless abandon and failed to fulfill their duty to the Creator? The Scriptures enlighten us on this:

“Wait on the LORD, And keep His way, And He shall exalt you to inherit the land; When the wicked are cut off, you shall see it. I have seen the wicked in great power, And spreading himself like a native green tree. Yet he passed away, and behold, he was no more; Indeed I sought him, and he could not be found. Mark the blameless man, and observe the upright; For the future of that man is peace. But the transgressors shall be destroyed together; The future of the wicked shall be cut off. But the salvation of the righteous is from the LORD; He is their strength in the time of trouble.” (Ps. 37:34-39 NKJV)

The Bible made it clear that though a person may acquire great power and yet has lived in wickedness, that person will be cut off and destroyed on the appointed day. Thus, the joy of the wicked is but fleeting or short-lived.

On the other hand, the righteous and blameless man—the Bible declares—has a bright future awaiting him: he shall receive salvation from the Lord and inherit the land, that is, the Holy City which God has prepared for those who will be saved on the Day of Judgment.

Are we living our life to the fullest? Do we make the most of every day, every hour, every minute of our lives? Let us remember our Maker now that we still have our life and our strength. Let us learn and understand His teachings and commandments, and strive to live by them. This way, we may have not gained much in this life in terms of material wealth, earthly wisdom, or power, yet we can say with confidence that our lives had been truly productive, and that our brief existence here on earth was indeed worthwhile. That is, we have lived our life to the fullest.

This article was originally published in the Pasugo: God’s Message magazine, June 2015 issue.