From darkness to light

There are people who are also in darkness. They are the people who do not have the true faith and divine calling to serve our Lord God.

By ROLAND A. AGUIRRE

BEING IN THE DARK can be very devastating and distressing. You lose your perspective. You have no reference point. You don’t know where you are—and where you are going. Those who cannot see—and became physically blind for various reasons—have experienced, from the beginning, such loss and pain in one way or another. But they are not alone.

In the dark
There are people who are also in darkness, who “grope about like blind people … stumble at noon, as if it were night, as if … in the dark world of the dead” (Isa. 59:9-10 Good News Bible). They are the people who do not have the true faith and divine calling to serve our Lord God. Their minds, not eyes, are blinded by Satan; thus, they fail to see the light that comes from the Good News or the words of God:

“They do not believe, because their minds have been kept in the dark by the evil god of this world. He keeps them from seeing the light shining on them, the light that comes from the Good News about the glory of Christ …” (II Cor. 4:4 GNB)

“Bring out the blind people who have eyes, And the deaf who have ears. … Fear not, for I am with you; I will bring your descendants from the east, And gather you from the west; I will say to the north, ‘Give them up!’ And to the south, ‘Do not keep them back!’ Bring My sons from afar, And My daughters from the ends of the earth.” (Isa. 43:8, 5-6 New King James Version)

These prophecies refer to the Church Of Christ in these last days. This is because the fortunate people referred to in the verses are to be called during the time called “ends of the earth” which refers to the period of time when the advent of the Lord Jesus Christ is near or “at the doors,” the beginning of which is signaled by a world war (Matt. 24:3, 33, 6-7). On July 27, 1914, the First World War broke out (The Nations at War, p. 8) signifying the beginning of the period “ends of the earth.” Concurrent with the beginning of World War I, the Church Of Christ was officially registered by Brother Felix Y. Manalo with the Philippine government. Furthermore, the calling of such people will begin from the east. The “east” in the prophecy refers to the distant or Far East (Isa. 43:5 GNB; Moffatt Translation). Undoubtedly, the prophesied place and time of emergence were fulfilled in this Church that emerged from the Philippines, a country in the Far East (World History, pp. 440-441). 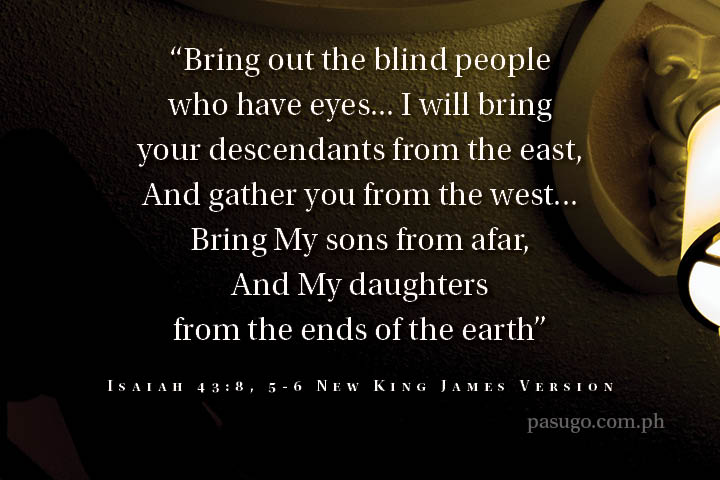 The people who would be chosen to be servants of God were also blind from God’s truth prior to their conversion into the true Church at first but because they were brought out of their former religions, their eyes have been opened. They were delivered from false teachings and unrighteous ways; they were able to see the falsity of the beliefs and practices of other religions.

Indeed, in the Christian Era, God appoints His Messenger to open the eyes of men to “turn them from the darkness to the light and from the power of Satan to God …” (Acts 26:17-18 GNB). Specifically, in these last days, God commissioned Brother Felix Y. Manalo as His messenger who would be instrumental in the restoration of the true Christian faith by means of preaching God’s righteousness, sending the light of His words into the darkness of men’s hearts and minds and snatching them from false religions that are holding them captives (Rev. 7:2-3; Isa. 46:11-13; Isa. 43:5-6; Rom. 1:16-17)—people have been brought from darkness to the light—to the true Church!

Still in darkness
Yet, the apostles warn about those who are still blind and in darkness among members of the Church Of Christ:

Thus, a member of the Church who hates his brother or sister in faith or holds a grudge against him or her, and does not obey the commandment concerning the love of brotherhood—filing suits against one another, brother against brother, before unbelievers, spreading rumors, deceiving or defrauding a brother or sister who did something wrong—is still blind or in darkness (I Cor. 6:4-8; Prov. 17:9). Even those who gossip and discuss other people’s lives, talking about others’ flaws and failures in life still abide in darkness for “they stir up trouble and break up friendships” (Prov. 16:28 GNB). 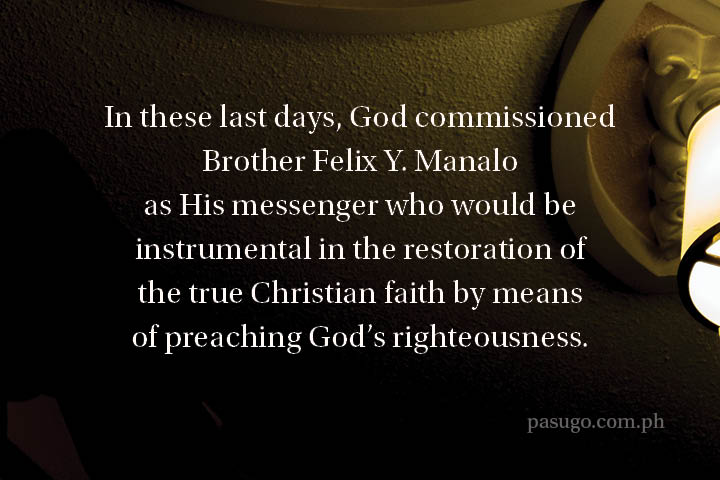 In addition, living a life of sin is tantamount to living in darkness. The Bible mentions about those “who have abandoned a righteous life to live in the darkness of sin” (Prov. 2:13 GNB). Truly, anyone whose way of life runs counter to what the Bible teaches, having traits and earthly desires such as “… sexual immorality, indecency, lust, evil passions, and greed” (Col. 3:5 GNB)—still lives in darkness.

We should not be drawn to these deeds of darkness. Apostle Paul’s advice is unequivocal:

“Have nothing to do with the worthless things that people do, things that belong to the darkness. Instead, bring them out to the light.” (Eph. 5:11 GNB)

Belonging to the light
God’s righteous servants must bear in mind Apostle Paul’s admonition as well:

“You yourselves used to be in the darkness, but since you have become the Lord’s people, you are in the light. So you must live like people who belong to the light.” (Eph. 5:8 GNB)

Belonging to the light means, not only living harmoniously as brothers and sisters in the Church, but also getting rid of evil deeds and desires, being decent and true in all that we do:

“The night is almost gone; the day of salvation will soon be here. So don’t live in darkness. Get rid of your evil deeds. Shed them like dirty clothes. Clothe yourselves with the armor of right living, as those who live in the light. We should be decent and true in everything we do, so that everyone can approve of our behavior. Don’t participate in wild parties and getting drunk, or in adultery and immoral living, or in fighting and jealousy. But let the Lord Jesus Christ take control of you, and don’t think of ways to indulge your evil desires.” (Rom. 13:12-14 New Living Translation) 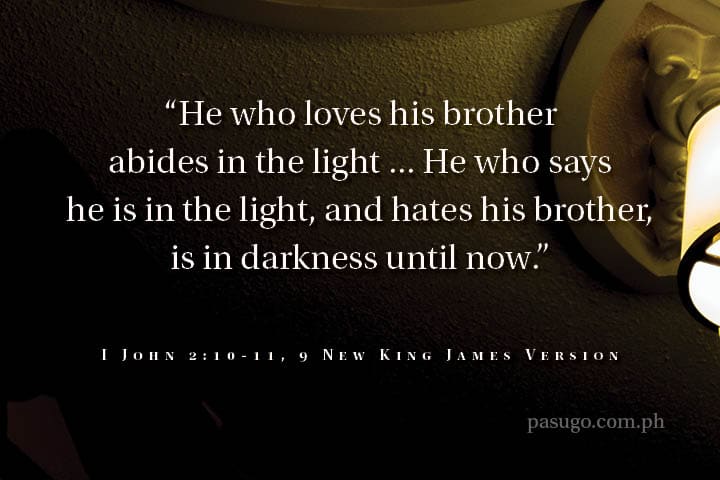 Living like people who belong to the light is not an impossible task. God, who is our light and in Whom there is no darkness (I John 1:5), is with us. Also, His word that is a guide and light in our path (Ps. 119:105) can help us defeat and dispel darkness. Hence, let us take comfort in God’s promise to us if we live in the light in these dark and difficult times:

“Yet if you devote your heart to him and stretch out your hands to him, if you put away the sin that is in your hand and allow no evil to dwell in your tent, then you will lift up your face without shame; you will stand firm and without fear. You will surely forget your trouble, recalling it only as waters gone by. Life will be brighter than noonday, and darkness will become like morning. You will be secure, because there is hope; you will look about you and take your rest in safety.” (Job 11:13-18 New International Version)

Light and salvation
More importantly, we can ensure our hope of receiving the great reward that awaits us on Judgment Day if we remain in the light; when we uphold the love of brotherhood, we abide not only in the light but in eternal life (I John 3:14-15). On the other hand, remaining in darkness by refusing to heed God’s call to turn away from sinful and wicked life could have dire consequences: we would be driven from light into darkness—to perdition:

“The light of the wicked indeed goes out, And the flame of his fire does not shine … He is driven from light into darkness, And chased out of the world.” (Job 18:5, 18 NKJV) 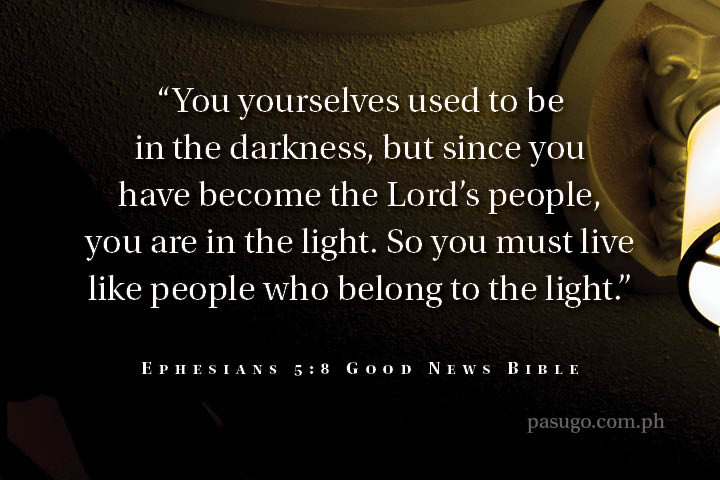 The Bible made it clear that those who are no longer in darkness or those who belong to and remain in the light are the ones who will be saved:

“For you yourselves know very well that the Day of the Lord will come as a thief comes at night. When people say, ‘Everything is quiet and safe,’ then suddenly destruction will hit them! It will come as suddenly as the pains that come upon a woman in labor, and people will not escape. But you, brothers, are not in the darkness, and the Day should not take you by surprise like a thief. All of you are people who belong to the light, who belong to the day. We do not belong to the night or to the darkness. God did not choose us to suffer his anger, but to possess salvation through our Lord Jesus Christ.” (I Thess. 5:2-5, 9 GNB)

Remaining in the light
Now that Judgment Day is fast approaching, every member of the Church Of Christ must make sure that he or she walks in the light, by constantly obeying the words of God, not in the darkness of destructive ways, by breaking His commandments—in order not to lose our sacred privilege to receive salvation and the everlasting life.

Let us promise then that we will remain forever in the light, not losing our perspective and sense of direction. Let us always remember that we do not belong to darkness anymore. Nor are we “running aimlessly … [fighting] like a man beating the air” (I Cor. 9:26 NIV). We know exactly where we are going. And as we travel toward our true home, may we defeat the spiritual forces of evil around us, standing firm on the sure word of the prophecy that testifies to our calling and election:

“And so we have the prophetic word confirmed, which you do well to heed as a light that shines in a dark place, until the day dawns and the morning star rises in your hearts … Therefore, brethren, be even more diligent to make your call and election sure, for if you do these things you will never stumble; for so an entrance will be supplied to you abundantly into the everlasting kingdom of our Lord and Savior Jesus Christ.” (II Pet. 1:19, 10-11 NKJV)

This article was originally published in the Pasugo: God’s Message magazine, April 2011 issue.