THE RESURRECTION OF our Lord Jesus Christ is one of the greatest events in the history of Christendom. Not only did this fulfill the biblical prophecies concerning Christ’s work and mission but it also significantly manifested the fulfillment of man’s long standing hope of victory over his gravest problem—death—and of his attainment of God’s promised salvation:

“But the truth is that Christ has been raised from death, as the guarantee that those who sleep in death will also be raised.” (I Cor. 15:20 Good News Bible)

Just as death is a certainty, so is the resurrection of the dead.

But, there are people who doubt the idea of the dead being raised to life, especially today when even the brightest of scientist haven’t discovered this for a fact. Apostle Paul explains the truthfulness of this doctrine of the Bible by saying:

Indeed, a seed has to dry out before it sprouts to life. Following this metaphor, the apostle said:

The natural body we have now ages, grows weak, dies, and is to be buried in the ground where it will see corruption and decay. But at the day of resurrection, it will be replaced by a spiritual body, one that is without corruption, glorious, honorable, and raised in power.

This happened to our Lord Jesus Christ (I Cor. 15:15, 23). It will happen again to all the dead at the appointed time. 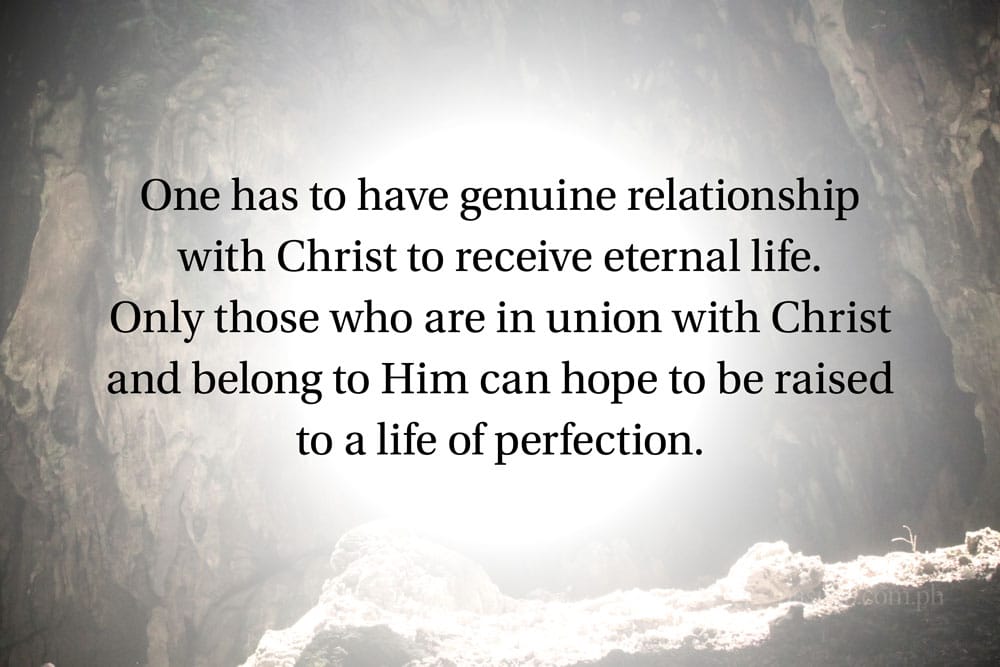 “Don’t be so surprised! Indeed the time is coming when all the dead in their graves shall hear the voice of God’s Son, and shall rise again-those who have done good, to eternal life; and those who have continued in evil, to judgment.” (John 5:28-29 Living Bible)

Man shall rise from death to receive either eternal life or judgment. Who will be raised to life when Christ returns?

One has to have genuine relationship with Christ to receive eternal life. Only those who are in union with Christ and belong to Him can hope to be raised to a life of perfection. Which has relation to Christ? In Ephesians 5:30, 32, this is written:

“Because we are members (parts) of His body …. This mystery is very great, but I speak concerning [the relation of] Christ and the church.” (Amplified Bible)

It is the Church which has relation to Christ. Through it, a person becomes truly one with Christ because the true Church is the body of Christ, and He is its head (Col. 1:18; Eph. 2:15). The apostle identify this Church as the Church of Christ:

Therefore, relationship with Christ is not just a personal thing as what many people believe. One cannot be in union with Christ by merely professing faith in Him as Lord and Savior. He must also accept and join the Church Of Christ because it is the way to become united with Christ. 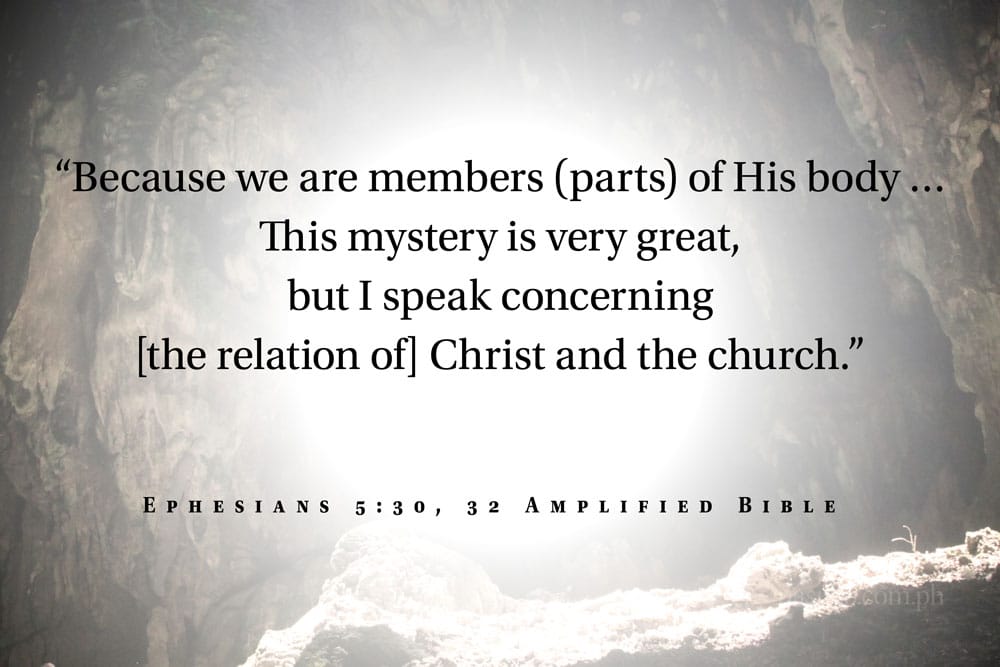 The first resurrection
Those who are in Christ or members of the Church of Christ will be the first ones to be raised to life:

“For the Lord Himself will descend from heaven with a shout, with the voice of an archangel, and with the trumpet of God. And the dead in Christ will rise first. Then we who are alive and remain shall be caught up together with them in the clouds to meet the Lord in the air. And thus we shall always be with the Lord.” (I Thess. 4:16-17 NKJV)

Apostle Paul explained how the first resurrection of the dead will take place. He said that the “dead in Christ,” or the members of the Church Of Christ who died will rise first on His Second Coming. Meanwhile, the members who are alive at the day of Christ’s return will no longer taste death. Instead, they shall dwell with the Lord in the heavenly abode with their resurrected brethren. The Second Death shall have no power over them:

“Blessed and holy is he who has part in the first resurrection. Over such the second death has no power, but they shall be priests of God and of Christ, and shall reign with Him a thousand years.” (Rev. 20:6 NKJV)

A great fortune awaits those who belong to the Church of Christ. Being among those who will take part in the first resurrection, they will be saved from the eternal punishment in the lake of fire. 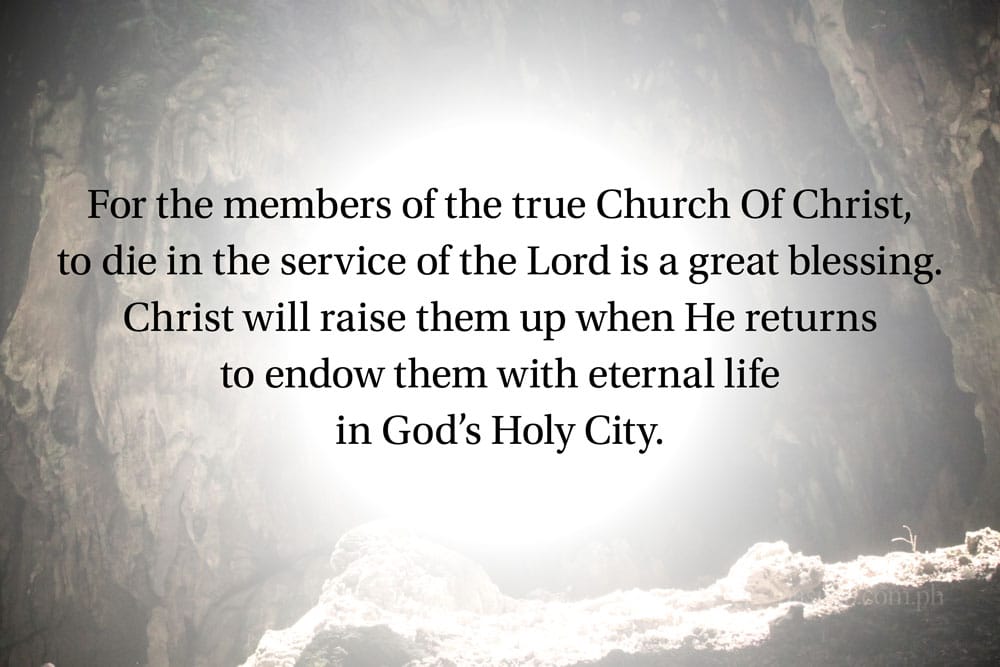 The second resurrection
What about those who will not take part in the first resurrection? The book of Revelation reveals what kind of resurrection awaits them:

“Now when the thousand years have expired, Satan will be released from his prison and will go out to deceive the nations which are in the four corners of the earth, Gog and Magog, to gather them together to battle, whose number is as the sand of the sea. They went up on the breadth of the earth and surrounded the camp of the saints and the beloved city. And fire came down from God out of heaven and devoured them. The devil, who deceived them, was cast into the lake of fire and brimstone where the beast and the false prophet are. And they will be tormented day and night forever and ever. … Then Death and Hades were cast into the lake of fire. This is the second death.” (Rev. 20:7-10, 14 NKJV)

Those who are not part of the first resurrection will be raised to face judgment. They will suffer both on Judgment Day when the ungodly are destroyed (II Pet. 3:7, 10) and on the second resurrection a thousand years later when they will be cast into eternal torment in the lake of fire.

There is a great difference between the first and second resurrection in terms of time and more importantly the condition where they lead to. While a great fortune awaits those who will share in the first resurrection, eternal punishment will befall the rest or those who do not belong to Christ. Thus, to whom shall death come as a great blessing?

“Then I heard a voice from heaven saying to me, ‘Write: “Blessed are the dead who die in the Lord from now on”.’ ‘Yes,’ says the Spirit, ‘that they may rest from their labors, and their works follow them’.” (Rev. 14:13 NKJV)

For the members of the true Church Of Christ, to die in the service of the Lord is a great blessing. Christ will raise them up when He returns to endow them with eternal life in God’s Holy City. There, they shall rest from all pains, sufferings, loneliness, and even death (Rev. 21:1-4).

One should join the Church Of Christ for him to share in the victory of Christ over death and His gracious inheritance in the Holy City. For, just as the Lord Jesus Christ was raised to glory, so will He raise the faithful members of His Church and transform their lowly body “that it may be conformed to His glorious body” (Philip. 3:20-21).