ONLY ONE CHURCH in the entire world—the Church Of Christ (Iglesia Ni Cristo)—has the same characteristics as the Church established by our Lord Jesus Christ in Jerusalem in the first century and described in the New Testament that was administered by the apostles. Five among these distinguishing characteristics are as follows:

In the Church Of Christ described in the New Testament, this was evident when a dispute that broke out—concerning whether the Gentile converts still needed to go through the Jewish custom of circumcision—was settled:

“Some men came down from Judea to Antioch and were teaching the brothers: ‘Unless you are circumcised, according to the custom taught by Moses, you cannot be saved.’ This brought Paul and Barnabas into sharp dispute and debate with them. So Paul and Barnabas were appointed, along with some other believers, to go up to Jerusalem to see the apostles and elders about this question.” (Acts 15:1-2 New International Version)

True Christians are united in their faith in all the Christian doctrines; they do not adhere to the popular Protestant saying of “agreeing to disagree.” The members of the Church back then did not split into factions with differing personal interpretations and did not say, “Just as long as we all believe in Jesus, we can all be Christians even with our doctrinal differences!” Since they understood that they were all parts of one body with Christ as their head, they knew they had to agree on all matters of belief and practice. 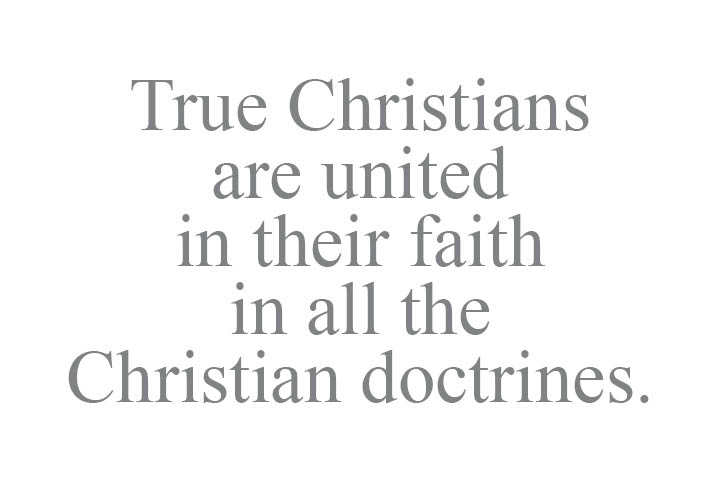 One centralized administration
From that same Bible passage, it is also clear that the Church Of Christ members during the time of the apostles also knew where to go for the resolution of any dispute. From Antioch, the disputing groups all knew that they had to “go up to Jerusalem to see the apostles and elders about this question.”

Therefore, resolution of disputes was not by having a popular vote among the Church’s members to determine what to believe. It was also not by giving personal interpretations of Bible passages—even though what we today call the Old Testament was already available then for reading. All the more did they not go to governing authorities or any “who are not part of the church” (I Cor. 6:4 Easy-to-Read Version) for help in settling their disputes.

One overall presiding elder
After opinions, requests, and recommendations are expressed, the third characteristic can then be seen: all the Church ministers, officers, and members await the final decision of the one minister in the Church who has the authority to make judgments for the whole Church.

The overall decision-maker for the Church is not someone who hides or refuses to make public his God-given authority, inasmuch as his authority to make judgments for the Church is vital for the Church’s welfare in keeping the members obedient to God’s will. In the first century, after the Lord Jesus had already ascended to heaven, all the members of the Church recognized as their spiritual leader and overall overseer Apostle James:

“The whole assembly became silent as they listened to Barnabas and Paul telling about the miraculous signs and wonders God had done among the Gentiles through them. When they finished, James spoke up. ‘Brothers, listen to me … It is my judgment …’” (Acts 15:12-13, 19 NIV, emphasis ours)

In the Church Of Christ today, the man who does that is the Executive Minister, Brother Eduardo V. Manalo. He is the one who makes decisions that ensure that the whole Church remains one. When the Church elder who presides over the entire Church makes decisions for the Church, he bases it on the Scriptures (Acts 15:15-18 NIV) and is guided and inspired by the Holy Spirit:

“It seemed good to the Holy Spirit and to us not to burden you with anything beyond the following requirements.” (Acts 15:28 NIV) 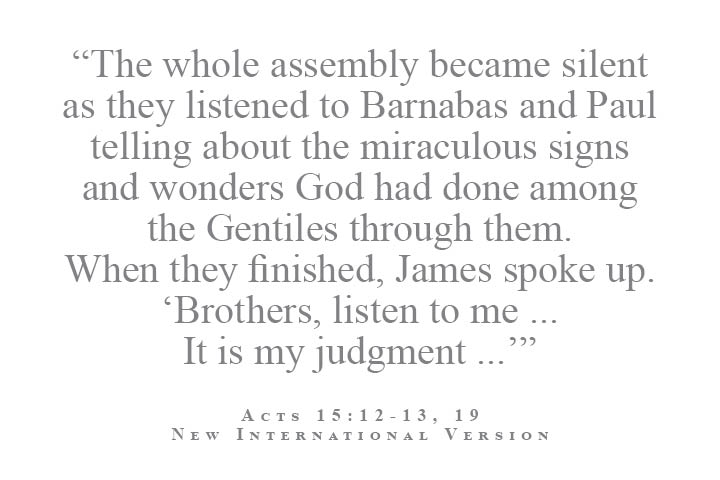 Decisions for the whole emanate from the central administration

“So the men were sent off and went down to Antioch, where they gathered the church together and delivered the letter. The people read it and were glad for its encouraging message.” (Acts 15:30-31 NIV)

Because of the importance of the decisions made by the one who administers the entire Church, a way is made to make sure that the message reaches all of God’s people. That is the fourth characteristic shared by the true Church then and now.

In the early Church, men were sent to deliver the letter containing Apostle James’ decision for all the members to observe. Today, modern means of communication and transportation are utilized for the same purpose.

The members receive the decision with gladness
As the verse in the previous section stated: “… The people read it and were glad for its encouraging message.” This is the fifth characteristic: true members of the one true Church Of Christ, both then and now, respond with gladness to any decision of the Presiding Elder. The blessed result for them for uniting with the Presiding Elder is that they are “strengthened in the faith” and grow in numbers (Acts 16:5 NIV).

True Christians recognize the God-given duty of the man entrusted to oversee the flock. They understand that the reason the Lord God has placed an administration in the Church Of Christ is to make His message fully known:

“I have become its minister, according to God’s administration that was given to me for you, to make God’s message fully known.” (Col. 1:25 Holman Christian Standard Bible)

Members of the Church Of Christ understand that God placed one leader in a centralized administration in the one true Church to make sure that all its members stay bound together by His message. They remain members of only one body, whose only Head is Christ.

This is why today the true Christians are one with the Executive Minister, Brother Eduardo V. Manalo, and are proud to be members of the Church Of Christ.

This article was originally published in the Pasugo: God’s Message Magazine, January 2017 Issue.