By LLOYD I. CASTRO

WHAT MATTERS MOST to Iglesia Ni Cristo (Church Of Christ) members is being so. Their membership in this true Church is their pride and honor. In coping with dire situations, its preservation is second to none. They will defend it with their very own lives, if they must. For what’s at stake, ultimately, is their hope of receiving salvation and everlasting life that our Lord Jesus Christ will grant on His nearing return.

This is the noble aim of the Church Administration’s toils— that members of the Church Of Christ successfully finish their spiritual journey. They will stand up to any threat on their God-given calling as His servants and children. They cannot be weighed down by any woe or foe as they make their way through this beleaguered world toward the Holy City, their true home.

What keeps them going is God’s promise to deliver them from difficult situations.

Praying—duty and right
When in distress, God’s faithful servants’ reaction is to pray to Him:

“Therefore let all who are faithful offer prayer to you; at a time of distress, the rush of mighty waters shall not reach them. You are a hiding place for me; you preserve me from trouble; you surround me with glad cries of deliverance.” (Ps. 32:6–7 New Revised Standard Version)

God is the shelter, preserver, and deliverer of His people. They will not perish even in adverse situations. It is only right that they pray to Him. In fact, it is their duty to do so always as one of their offerings to Him (Luke 18:1; Heb. 13:15). So, praying is not a mere reactive move, but rather a proactive one. True Iglesia Ni Cristo members pray for God’s protection and blessings at all times, even in times of peace and plenty, to prepare for when troubles and tight situations come.

Faith in the efficacy of prayer must be solid. Making it a part of their daily life is most beneficial.

But saying a prayer is not all that it takes to be heard by God. That privilege is held by His chosen:

“Remember that the LORD has chosen the righteous for his own, and he hears me when I call to him.” (Ps. 4:3 Good News Bible)

In the Christian era, God’s chosen are those blessed with redemption through Christ’s blood, the forgiveness of sins (Eph. 1:3–7). The Bible declares that it is the Church Of Christ— not the whole world—that Christ has redeemed:

The members of the Church Of Christ are the chosen people of God in our time. Thus, to join and remain in this Church is a must not only to be sure of salvation (Eph. 5:23) but also to have the right to call on God and be heard. 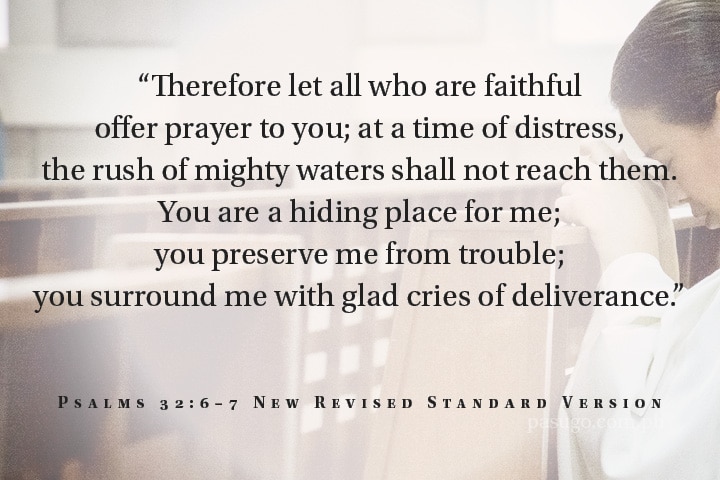 No wonder, the Iglesia Ni Cristo faithful cherish their membership so much. They will guard it no matter what, knowing that God will help them.

So, when in a tight spot, God’s servants use their right to pray to Him, for, as stated in Job 5:8, “If I were you, I would turn to God and present my case to him” (GNB). They cast their worries on Him and are given strength in return:

Thus strengthened, they can now surmount their grief, keeping their divine calling and hope for salvation intact. Prayer, indeed, is a powerful weapon against the miseries in this world.

The power of prayer
The biblical account about the Israelite king, Asa, proves the power of prayer in the lives of God’s servants. But take note in the following verses that its “power” stems from God’s being pleased with them:

“Asa pleased the LORD, his God, by doing what was right and good. … He commanded the people of Judah to do the will of the LORD, the God of their ancestors, and to obey his teachings and commands. Because he abolished the pagan places of worship and the incense altars from all the cities of Judah, the kingdom was at peace under his rule.” (II Chr. 14:2, 4–5 GNB)

In this part of the history of Israel, God’s first nation, the land had two kingdoms—Israel in the north and Judah in the south. Asa, the third king of Judah, led God’s people in obeying His teachings and commands. He abolished pagan worship and idolatry. He upheld the proper worship of God.

As God’s people today, Iglesia Ni Cristo faithful never forsake the worship service, in any kind of weather—both in nature and in life. That is when they can best pray to God. By doing this will of His, they will receive His favors, as Asa and his people did:

“He told the people of Judah, … ‘We have control of the land because we have done the will of the LORD our God. He has protected us and given us security on every side.’ And so they built and prospered.” (II Chr. 14:7 GNB)

Time came when a powerful enemy rose against Judah:

“Then Zerah the Ethiopian came out against them with an army of a million men and three hundred chariots …” (II Chr. 14:9 New King James Version) 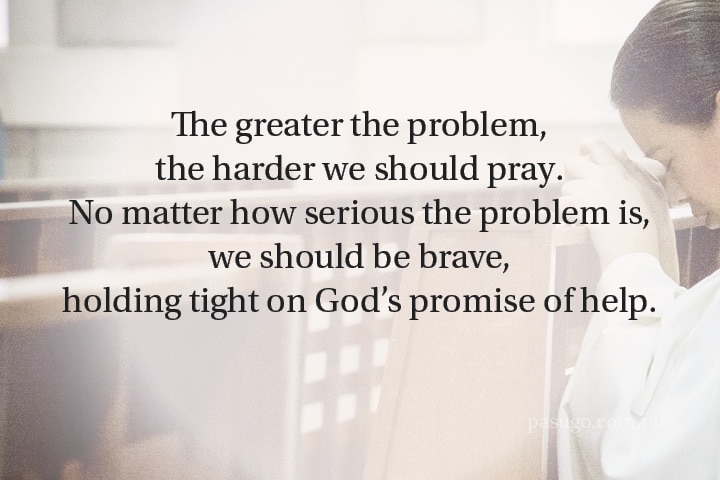 With 580,000 fighting men (II Chr. 14:8), Judah’s army was large, yet they were pitted against an army double their strength. Did they change when their peace and security was threatened? No, they did not. Amid the serious problem faced by God’s people then, Asa did not fear and give up hope. Why should he when he had the Almighty with him? The very first thing he did was turn to God, Who can rescue the weak against the strong. To Asa, no one is mightier than God:

“Asa prayed to the LORD his God, ‘O LORD, you can help a weak army as easily as a powerful one. Help us now, O LORD our God, because we are relying on you, and in your name we have come out to fight against this huge army. LORD, you are our God; no one can hope to defeat you’.” (II Chr. 14:11 GNB)

At times, Church Of Christ members are faced with a similar scenario. Peacefully going about their services to God, when all of a sudden a problem comes, so serious and seemingly bigger than they can handle. They will do what a faithful servant of God ought to do—pray to God.

Iglesia Ni Cristo members draw inspiration from how God’s Messenger in these last days, Brother Felix Y. Manalo, relied on Him as he carried out his mission in God’s and in Christ’s Name. God fulfilled His promise to be with him, to strengthen, help, and uphold him (Isa. 41:9–10). That is why the Church Of Christ, the fruit of his labors, has spread far and wide and grown tremendously.

So, when you have a problem, great or small, do you think of God first and at once? Do you place your trust in Him? Do you confront your problem as King Asa did?

What happened to the large army that Asa and Judah encountered demonstrates the efficacy of prayer of God’s obedient servant:

“So the LORD struck the Ethiopians before Asa and Judah, and the Ethiopians fled. And Asa and the people who were with him pursued them to Gerar. So the Ethiopians were overthrown, and they could not recover, for they were broken before the LORD and His army. And they carried away very much spoil.” (II Chr. 14:12–13 NKJV) 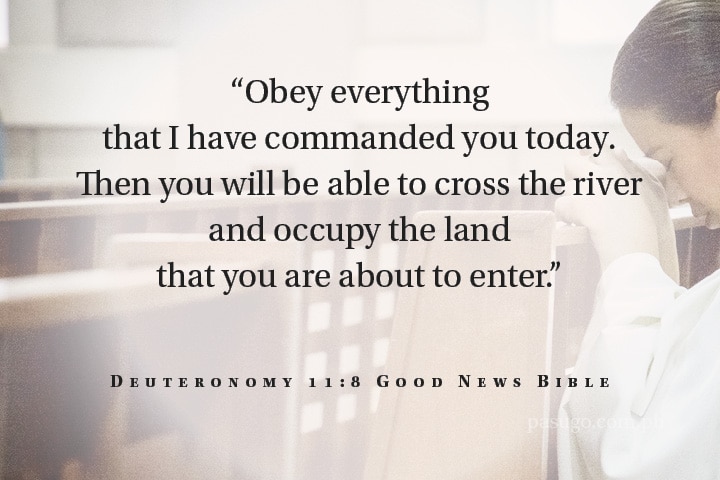 Let us learn from this. The greater the problem, the harder we should pray. No matter how serious the problem is, we should be brave, holding tight on God’s promise of help. Fear or worry only makes our hope dwindle. Doubt is one of the greatest barriers to receiving God’s help (James 1:6–8). And God’s help is the very thing we need when we go through bouts of weakness due to the miseries pressing on all sides:

“But his reply has been—‘My help is enough for you; for my strength attains its perfection in the midst of weakness.’ Most gladly, then, will I boast all the more of my weaknesses, so that the strength of the Christ may overshadow me. That is why I delight in weakness, ill-treatment, hardship, persecution, and difficulties, when borne for Christ. For, when I am weak, then it is that I am strong!” (II Cor. 12:9–10 Twentieth Century New Testament)

God’s help is enough for all His children’s needs. Though weak, yet they are made strong by the power that God gives through Christ. Whatever Iglesia Ni Cristo members go through in their life, they have solid hope that they will prevail because God promised to strengthen them (Isa. 41:9–13).

Coupled with obedience
It is not enough just to have faith; we should obey all of God’s commands because that pleases Him. Only then can we be sure that He will strengthen us:

“Obey everything that I have commanded you today. Then you will be able to cross the river and occupy the land that you are about to enter.” (Deut. 11:8 GNB)

To disobey or take offense of God’s commands does not pay. It is the obedient whom He will give ability and success.

One of God’s commands His faithful servants always obey is to worship Him. Iglesia Ni Cristo members are devoted to the worship service. Missing it even in times of problems never crosses their minds. Instead, they are all the more eager to worship God not only to glorify Him but also for this reason:

In the worship service, they can approach Him to make known their requests, and receive His guidance through His words and the strength through the Holy Spirit (Eph. 3:16–18).

True Church Of Christ members can depend on God for help and strength, especially in dire need. Their hope is firm that He listens to their prayer. With faith and obedience, they shall receive His protection and support enabling them to overcome every obstacle, completing the race God has given them and thus make it to the Holy City.

This article was originally published in the Pasugo: God’s Message magazine, March 2019 issue.