How you can overcome death

Is it possible to overcome death? Yes, it is. Like our Lord Jesus Christ, we can emerge as triumphant conquerors of death to receive everlasting life on Judgment Day.

ON TOP OF ALL THE PROBLEMS that embattle each human being is death. Death comes anywhere, anytime. Young and healthy as many people are at this moment, the possibility of dying anytime remains. Every hour and every day, everyone faces the danger of losing his life. Indeed, death is a constant threat over which people by themselves have no power.

Apostle Paul expressed man’s sad plight in the face of this dreaded foe when he said:

“What a miserable man I am! Who will save me from this body that brings me death?” (Rom. 7:24 New Century Version)

When death comes, the amount of one’s riches or knowledge no longer matters. Rich or poor, learned or ignorant, everyone suffers the same end at the moment of death:

“No one can keep himself from dying or put off the day of his death. That is a battle we cannot escape; we cannot cheat our way out.” (Eccles. 8:8 Good News Bible)

Why death is inevitable
No one can avoid death (Ps. 89:48) because God appointed all sinners to “die once, and after that comes judgment” (Heb. 9:27 Revised Standard Version). The Bible says:

“Therefore, just as through one man sin entered the world, and death through sin, and thus death spread to all men, because all sinned.” (Rom. 5:12 New King James Version)

Sinners are condemned by God to die (Rom. 6:23). Making the matter worse is the fact that there is a second death in the lake of fire which is the full payment for sin:

“Then death and Hades were thrown into the lake of fire. The lake of fire is the second death.” (Rev. 20:14 New International Version)

Just as man’s wealth and wisdom cannot save him from death that is the cessation of breath, these cannot save him as well from the “fire of [God’s] anger” on the Day of Judgment:

“The great day of the LORD is near―very near and coming fast! That day will be bitter, for even the bravest soldiers will cry out in despair! It will be a day of fury, a day of trouble and distress, a day of ruin and destruction, a day of darkness and gloom, a black and cloudy day, a day filled with the sound of war trumpets and the battle cry of soldiers attacking fortified cities and high towers. The LORD says, ‘I will bring such disasters on mankind that everyone will grope about like a blind man. They have sinned against me, and now their blood will be poured out like water, and their dead bodies will lie rotting on the ground.’ On the day when the LORD shows his fury, not even all their silver and gold will save them. The whole earth will be destroyed by the fire of his anger. He will put an end―a sudden end―to everyone who lives on earth.” (Zeph. 1:14-18 GNB)

This is man’s gravest problem. Because of the sin he has committed, he has been condemned to face the day he breathes his last, and worse, the everlasting punishment in the lake of fire. He is considered “spiritually dead” due to sin.

Hence, man needs to find the way to be removed from spiritually dead because of sin so he will no longer be under God’s curse and be able to overcome death―the cessation of breath and the eternal condemnation on the Day of Judgment. 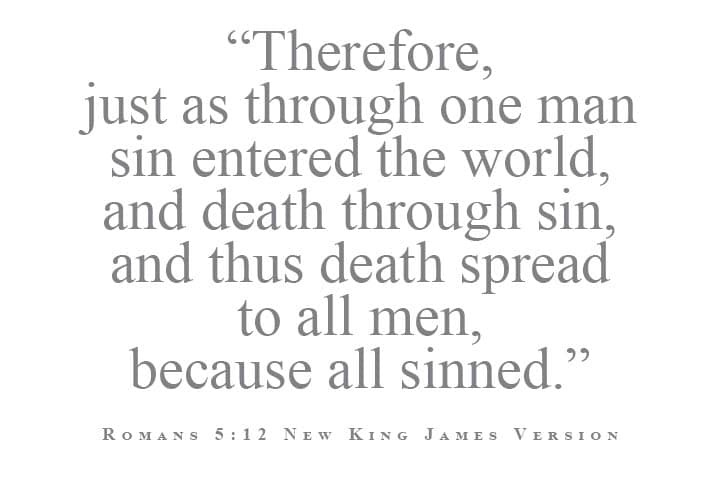 From death to life
God is both just and merciful. While He has sentenced man to die to pay for his sins, He has also shown His mercy by designing the way by which man can be saved:

“But God’s mercy is so abundant, and his love for us is so great, that while we were spiritually dead in our disobedience he brought us to life with Christ. It is by God’s grace that you have been saved. In our union with Christ Jesus he raised us up with him to rule with him in the heavenly world.” (Eph. 2:4-6 GNB)

People are not totally helpless, after all, for God sent His Son, Jesus, to bring sinners back to life and be saved. But not all would benefit from this act of grace―only those who are in “union with Christ.”

The one new man
As His Father willed, Christ created in Himself the one new man so that sinners can have the chance to be at peace with God:

“Having abolished in His flesh the enmity, that is, the law of commandments contained in ordinances, so as to create in Himself one new man from the two, thus making peace.” (Eph. 2:15 NKJV)

Hence, people must become part of this one new man to be freed from the curse of death and judgment.

The one new man is made up of Christ as the head and the Church as His body:

This Church is the Church Of Christ:

Therefore, by joining the Church Of Christ a person becomes part of the one new man and, thus, become in “union with Christ.” Christ guaranteed that His Church will not be overcome by death:

“And so I tell you, Peter: you are a rock, and on this rock foundation I will build my church, and not even death will ever be able to overcome it.” (Matt. 16:18 GNB)

Therefore, by becoming members of the Church Of Christ, people will be able to triumph over death.

Overcoming death
How the promise of the Lord Jesus Christ that His Church will not be overcome by death will be fulfilled was explained by the Apostle Paul as follows:

“Behold, I tell you a mystery: We shall not all sleep, but we shall all be changed—in a moment, in the twinkling of an eye, at the last trumpet. For the trumpet will sound, and the dead will be raised incorruptible, and we shall be changed. For this corruptible must put on incorruption, and this mortal must put on immortality.” (I Cor. 15:51-53 NKJV)

People will age and succumb to sickness and death because the human body is corruptible. But on Christ’s return, the corruptible bodies of the members of the Church Of Christ will be replaced with the incorruptible. Members who died before the Second Advent of Christ will be resurrected to receive eternal life. When this happens, “Death is swallowed up in victory” (I Cor. 15:54 NKJV)

So, if people aspire to be successful in life, the more they should strive to acquire for themselves that power greater than what the riches, wisdom, and fame offer—the power to conquer death.