Though peace in this world remains elusive despite the well-meaning efforts of many to achieve it, there is a kind of peace which Christ promised to His true servants.

By ROLAND A. AGUIRRE

NEWS HEADLINES scream of ongoing wars in many parts of the world today. Moreover, a new dimension of conflict and violence is becoming imminent. Just consider this: “And yet, conflict and violence are currently on the rise, with many conflicts today waged between non-state actors such as political militias, criminal, and international terrorist groups. Unresolved regional tensions, a breakdown in the rule of law, absent or co-opted state institutions, illicit economic gain, and the scarcity of resources exacerbated by climate change, have become dominant drivers of conflict …” (un.org)

The world we live in is, indeed, an increasingly dangerous planet. We can just imagine the devastating consequences these unending hostilities have on people’s lives and properties. Wars have caused untold economic and social damages in war-torn areas. And most victims of armed conflicts are civilians, a feature that scholars say distinguishes modern conflicts—75 percent or more of the casualties in today’s wars are civilians or non-combatants.

‘Peace, peace!’
Wars’ horrible effects have spawned the search for peace by world leaders, politicians, philanthropists, and artists who are bent on working out a formula for a lasting peace. No stones are left unturned in the aim to achieve world peace: diplomats shuttle to and from warring countries; talks are held; treaties are made to avert conflicts.

Still, there is no end in sight for the various conflicts happening around the world today.

This sad picture of reality reminds us of what is written in the Bible:

“They have also healed the hurt of My people slightly, Saying, ‘Peace, peace!’ When there is no peace.” (Jer. 6:14 New King James Version)

“When terror comes, they will seek peace, but there will be none.” (Ezek. 7:25 New International Version)

‘Destruction and violence are all around me’
God’s people in these last days understand that the bloodshed and violence happening in the world today are, in part, a consequence of man’s own sinful and destructive ways:

“Their feet run to evil, And they make haste to shed innocent blood; Their thoughts are thoughts of iniquity; Wasting and destruction are in their paths. The way of peace they have not known, And there is no justice in their ways; They have made themselves crooked paths; Whoever takes that way shall not know peace.” (Isa. 59:7–8 NKJV) 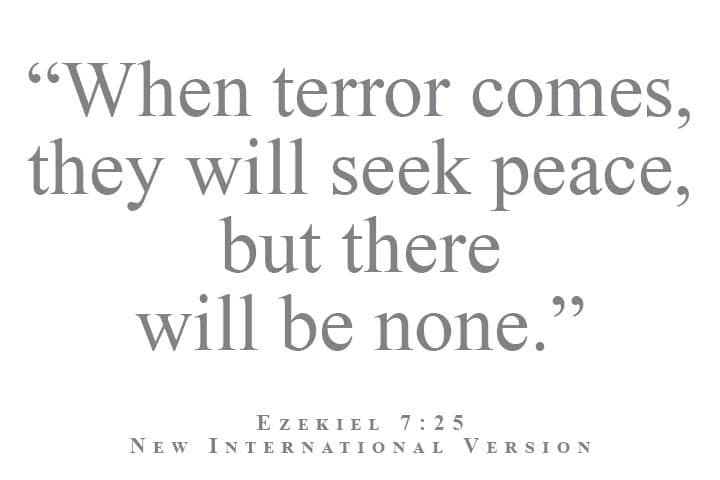 The escalation of the various conflagrations and conflicts comes as no surprise to the servants of God. The prospects for peace can be expected to look even dimmer. Such grim scenarios we see today are reminiscent of what Prophet Habakkuk wrote:

“Then the LORD said to his people, ‘Keep watching the nations around you, and you will be astonished at what you see. I am going to do something that you will not believe when you hear about it.’

“Destruction and violence are all around me, and there is fighting and quarreling everywhere. The law is weak and useless, and justice is never done. Evil men get the better of the righteous, and so justice is perverted. … “Their armies advance in violent conquest, and everyone is terrified as they approach. Their captives are as numerous as grains of sand.”
(Hab. 1:5, 3–4, 9 Good News Bible)

Sign of the nearing end
There is, indeed, more to war than meets the eye. Moreover, wars and the escalation of disasters and violence are among the signs of Christ’s impending return (Matt. 24:6-7, NKJV; I Thess. 5:2-4 GNB). And as man struggles to establish peace amid the unending cycle of conflicts and violence, the Bible avers, thus:

“For when they say, ‘Peace and safety!’ then sudden destruction comes upon them …” (I Thess. 5:3 GNB)

Christ’s Second Advent is the Day of Judgment or the end of the world which is far more catastrophic than any war man has ever known of:

“But the day of the Lord will come as a thief in the night, in which the heavens will pass away with a great noise, and the elements will melt with fervent heat; both the earth and the works that are in it will be burned up.

“But the heavens and the earth which are now preserved by the same word, are reserved for fire until the Day of Judgment and perdition of ungodly men.” (II Pet. 3:10, 7 GNB)

Thus, on Judgment Day, grave punishment is reserved for the ungodly or those who do not know God and do not obey the gospel of the Lord Jesus Christ (II Thess. 1:8-9 GNB). Truly, theirs is a fearful expectation of the Second Advent of Christ.

Important as it is for us to understand that wars, conflicts, and violence in the world today are signs of the coming end of the world, the more pressing concern that we should address is how to be saved from the eternal punishment on Judgment Day.

Attaining true peace
Though peace in this world remains elusive despite the well-meaning efforts of many to achieve it, there is a kind of peace which Christ promised to His true servants:

“I have told you this so that you will have peace by being united to me. The world will make you suffer. But be brave! I have defeated the world!” (John 16:33 GNB)

The peace He promised is not the kind of peace that man commonly knows of. Rather, it is the “peace with God through our Lord Jesus Christ,” which is the condition of having been freed from condemnation or eternal punishment in the lake of fire on Judgment Day (Rom. 5:1; 8:1 NKJV). 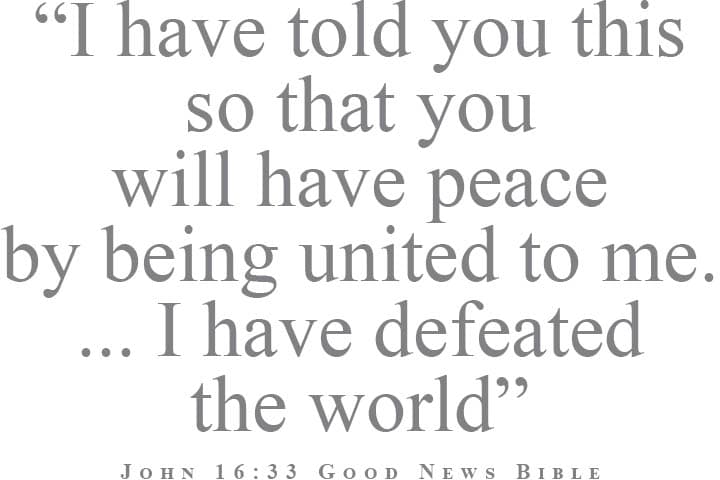 We should remember that because of man’s sin, he has lost peace with God: he became His enemy and was condemned to be punished in the lake of fire (Col. 1:21; Heb. 10:27 GNB). In this condition, man needs to regain peace with God or escape from condemnation. Such peace can be received only through Jesus Christ because only through His death can man’s sins be forgiven and hence be saved.

Where true peace can be found
The Bible affirms that those who have peace with God through Christ or have been freed from condemnation are in the one body:

“Let the peace of Christ rule in your hearts, to which indeed you were called in one body; and be thankful.” (Col. 3:15 New American Standard Bible)

The one body into which those who received peace were called is the Church headed by Christ (Col. 1:18 NKJV). This Church being referred to is the Church Of Christ, which was purchased by Christ with His precious blood:

“Take heed therefore to yourselves and to all the flock over which the Holy Spirit has appointed you overseers, to feed the church of Christ which he has purchased with his blood.”
(Acts 20:28 Lamsa Translation)

The members of the Church Of Christ are the ones who have been freed from condemnation and thus are blessed, for they have peace with God. Hence, in order for man to have hope of receiving the true and lasting peace he longs for, he should strive to enter the true Church Of Christ.

Indeed, amid wars and violence in the world, man can still find and attain peace through the Lord Jesus Christ by becoming a member of His Church—the Church Of Christ or the Iglesia Ni Cristo.