By LLOYD I. CASTRO

FEAR OF ETERNAL SUFFERING in hell and hope for everlasting bliss in heaven have led people to make great efforts to acquire traits of virtue and do works of goodness. Many, however, do not consider Church membership as one of the good works that must be done. Or, if they belong to a church, usually by accident of birth or by personal choice, they believe all churches or religions are of God so that the one to which they belong is as good as any. Or perhaps they hold on to the notion that membership or non-membership in any church is immaterial and that they can please God and hope to be saved as long as they possess goodness, however shallow, and perform good deeds, whatever these may be.

However, these beliefs not only lack scriptural basis but outrightly oppose apostolic teachings. The popular notion that one merely has to do good works to be saved is blatantly false. Apostle Paul said that man by himself cannot do good, as is expressed in his letter to the Roman Christians:

“I know that good does not live in me—that is, in my human nature. For even though the desire to do good is in me, I am not able to do it.” (Rom. 7:18 Good News Bible)

Man’s inability to do good
Apostle Paul, speaking not only for himself but for all humankind, said that he can desire to do good yet is unable to do it. He explained why:

Since Adam, man has rejected God’s law and instead let another law, that of sin, reign over him. Human nature has become such that it is weak and slave to sin. Not even the righteous are free from this prison. The wise King Solomon proves that “There is not a righteous man on earth who does what is right and never sins” (Eccles. 7:20 New International Version). 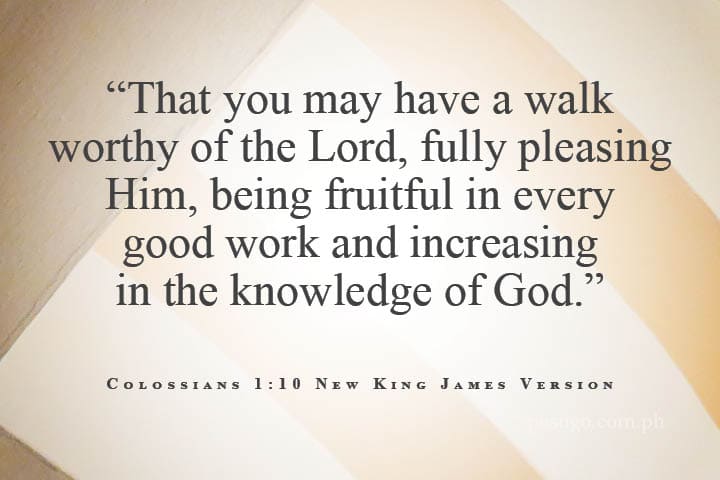 No matter how careful a man might be in handling his affair, one way or another, he falls prey to blunders, temptations, and mere neglect to think, say, or do what is lawful. Hence, he sins (I John 3:4). Righteous he may be by human standards but not by God’s, for all have sinned except our Lord Jesus Christ (Rom. 3:10-12, 23; I Pet. 2:21-22). Thus, the whole world of sinners cannot but face God’s justice:

“Now we know that everything in the Law applies to those who live under the Law, in order to stop all human excuses and bring the whole world under God’s judgment.” (Rom. 3:19 GNB)

God’s verdict is to destroy all ungodly men by fire on the Day of Judgment (II Pet. 3:7, 10). Man’s goodness and good works could not be used as justification of basis for his salvation. Otherwise, it would be as though God is indebted to him:

“Now to him who works, the wages are not counted as grace but as debt.” (Rom. 4:4 New King James Version)

Salvation is by grace and not as payment for debt. God does not owe any man salvation just because that man did good works. On the contrary, it is man who owes God because no matter how righteous he may be, man still has sin which he must pay through death (Rom. 6:23). He will be punished in the lake of fire, which is the second death (Rev. 20:14).

The work pleasing to God
This must not lead anyone, however, to think that he should do away with goodness and instead set his eyes on evil since his goodness will only be in vain come Judgment Day. Good traits and works, of course, have great value—in this life, in the eyes of other people, and to society in general. Awareness of man’s true state as discussed above should lead one to find that which will enable him to do the good works that bring honor to God. Apostle Paul’s letter to the Colossians indicated that he knew of people blessed to have found it. In fact, he exhorted them:

“That you may have a walk worthy of the Lord, fully pleasing Him, being fruitful in every good work and increasing in the knowledge of God.” (Col. 1:10 NKJV) 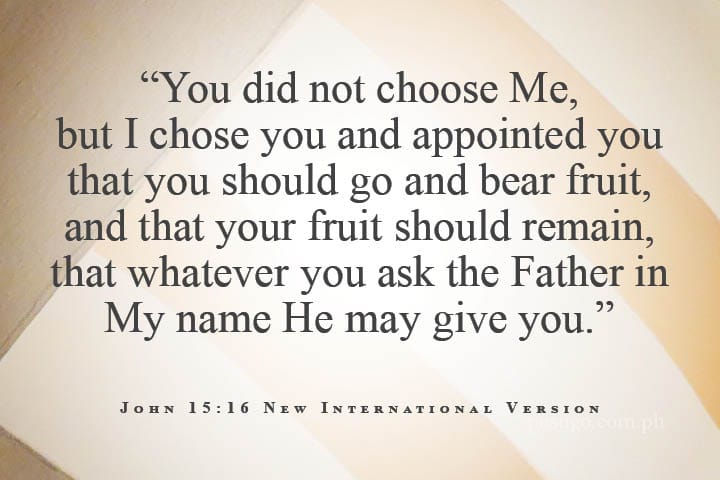 It is clear from Apostle Paul’s inspiring words that there is a way by which man can be fruitful in every good work that he “… may have a walk worthy of the Lord, fully pleasing Him.” But is he not the same apostle who said that man cannot do good? How can a person do what is good? Which is that good work one should be fruitful in? Apostle Paul gave light to this, too, as he taught the early Christians to be “filled with the fruit of righteousness that comes through Jesus Christ—to the glory and praise of God” (Philip. 1:11 NIV).

Only through Christ
The works that bring praise and glory to God are the fruits of righteousness which can be done only through the Lord Jesus Christ. These are not the works conceived only of man’s design but “… good works which God predestined (planned beforehand) for us” (Eph. 2:10 Amplified Bible; Titus 3:5). The Lord Jesus Christ further showed the importance of and the relationship that exist in abiding in Him:

“Abide in Me, and I in you. As the branch cannot bear fruit of itself, unless it abides in the vine, neither can you, unless you abide in Me.

“You did not choose Me, but I chose you and appointed you that you should go and bear fruit, and that your fruit should remain, that whatever you ask the Father in My name He may give you.” (John 15:16 NIV)

Hence, it is not true that just because one believed in Jesus and personally decided to accept Him as Lord and Savior, he is already of Christ. He has to prove that he has been chosen by Him. 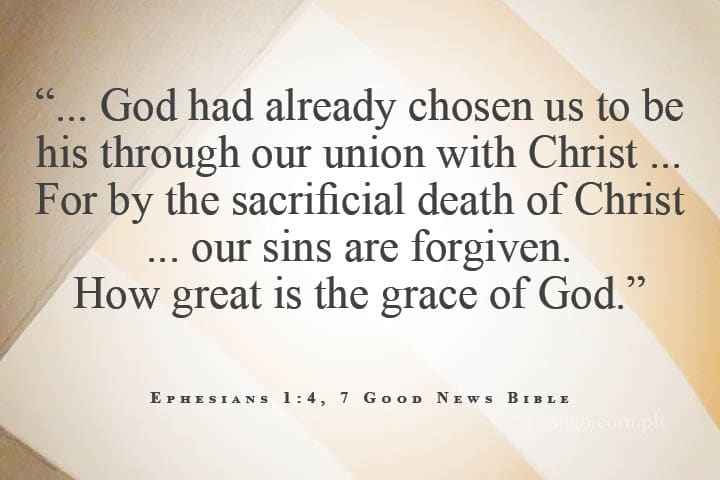 Only in the Church of Christ
A person’s good works are acceptable to God only when he is in the Church Of Christ. His good works or his obedience to God’s commands will result in the sanctification of his soul (John 17:17; Rom. 7:12). He will be among those presented by Christ to Himself holy and without blemish (Eph. 5:26-27).

The Lord God greatly values the worship and services done to Him by the Church Of Christ members because they have been redeemed by Christ. Apostle Paul said that:

“Even before the world was made, God had already chosen us to be his through our union with Christ, so that we would be holy and without fault before him. … For by the sacrificial death of Christ we are set free, that is, our sins are forgiven. How great is the grace of God.” (Eph. 1:4, 7 GNB)

Those redeemed through Christ’s sacrificial death were forgiven of their sins. They have been freed from the bondage of sin. Christ has already paid the price of their sins and, thus, they have been spared from God’s judgment. They have been purchased from being slaves of sin to being servants of God whose works are righteous in His eyes.

Contrary to the belief of many, not all people were redeemed by Christ—only the Church Of Christ. Apostle Paul pointed this out when he addressed the Church elders to: 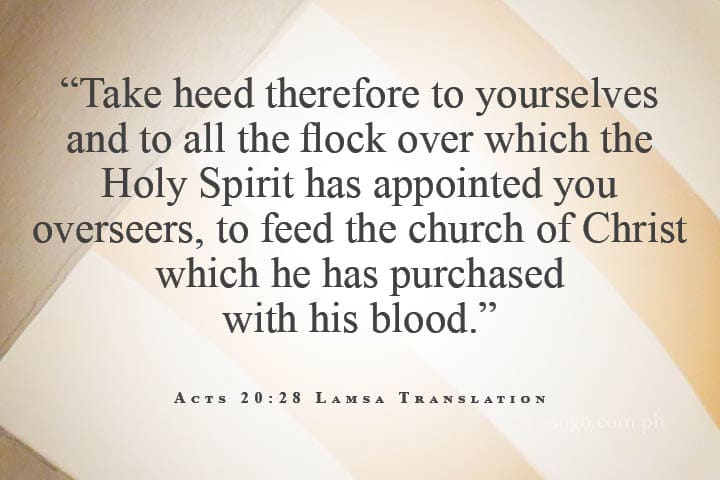 Only when a person is in the Church Of Christ can he benefit from Christ’s redemptive act. By virtue of this, he belongs to God, for the Church Of Christ is God’s own nation in these last days. Christ’s redemption is only for that which is subject to Him, the Church (Eph. 5:24). Outside the Church there is no redemption. Since outsiders are not members of His body, Christ cannot answer for their sins. They will have to pay for their own sins with the second death as the ultimate punishment. Thus, any good work which they have done will be rendered worthless. That is the meaning of the apostolic pronouncement that man cannot do good.

This may hurt, slight, or anger many people—but this is the truth. Yet, pain and resentment will surely flee one who will come to understand and believe that his need to be of Christ can only be fulfilled through membership in His Church, the Iglesia Ni Cristo. He must reject the false notions (1) that church membership is unnecessary (joining just any church is, but joining the true Church is very important) and (2) that all churches are of God, that man will be saved through membership in any church or religion as long as he performs good works (only in the one true Church can man do works that are good in God’s eyes and worthy of salvation).

Firm belief in and high regard for this truth are the reasons true members of the Iglesia Ni Cristo strive to be righteous in all their ways, devoted in attending worship services, and active in performing their various God-given duties such as missionary works, edification activities, cleaning and safeguarding the house of prayer, among others. They do not tire of doing these good works with the hope that if they stay in this state of membership until their death, they will be assured of salvation and resurrection on the glorious day of the Lord’s return.