We must not be misled by false beliefs concerning marriage. We must know whom the Bible identifies as truly married according to the will of God.

THE MANY CHANGES in society and the various problems in life have resulted in the shifting outlook of many people regarding marriage. One need not be a keen observer to know that a lot of people today are making a mockery of this holy institution. Statistics shows high incidences of divorce or separation among married couples who find it convenient to dissolve their union and spare themselves (or so they think) of living a turbulent life for some perceived “irreconcilable differences”.

The utter disregard of many of the marital bond can also be seen in the growing incidence of infidelity or unfaithfulness among husbands and wives and their failure to keep their vow of love to each other. Nowadays, it is also a common practice for a man and a woman to live together as if they were husband and wife without the benefit of marriage. “What for? What is important is that you get along well with each other!” many argue.

As if the foregoing scenarios were not enough, there are countries today that allow same-sex marriages. Hence, it is no longer unusual to see two men or two women making a travesty of God’s purpose in creating man and woman as a man marries another man and a woman marrying one belonging to her own gender. That this is seen among celebrities truly aggravates the situation—sending wrong signals to the general public.

We, members of the Church Of Christ, God’s people in these last days, must not in any way be influenced or misled by these false beliefs concerning marriage. Thus, it is but proper and appropriate to know whom the Bible identifies as truly married according to the will of God, and in turn share this knowledge with loved ones who are not yet members of the Church.

Whom God has truly joined together
Who are truly married? Our Lord Jesus Christ answers:

“… Haven’t you read the scripture that says that in the beginning the Creator made people male and female? And God said, ‘For this reason a man will leave his father and mother and unite with his wife, and the two will become one.’ So they are no longer two, but one. Man must not separate, then, what God has joined together.” (Matt. 19:4–6 Good News Bible)

God joins together as husband and wife individuals coming from opposite sexes, that is, a man and a woman. Not a man and another man, or a woman and another woman! The Bible clearly disapproves same-sex marriages. Moreover, our Lord Jesus Christ is against a man and a woman living together without being united by God in marriage. Our Lord Jesus Christ, therefore, is strongly opposed to premarital and extra-marital affairs. Precisely, for such relationships run counter to or are a grave violation of God’s will. 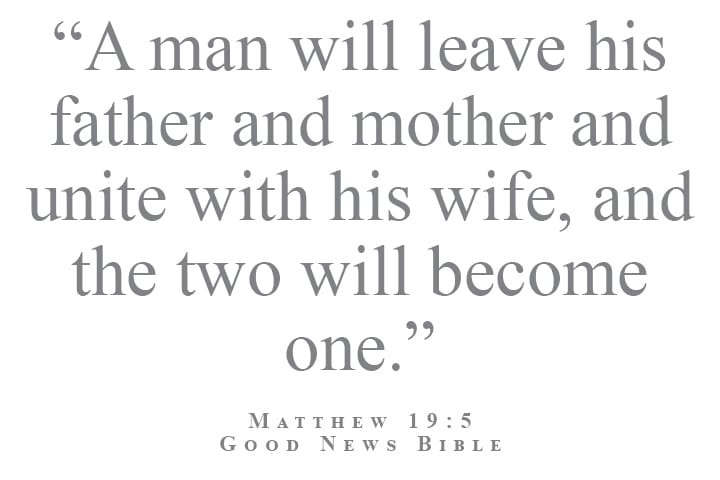 A life-long commitment
How does God join together a man and a woman? Until when shall their union be? How long shall they be bound together as husband and wife? The learned Apostle Paul answers:

“For the woman who has a husband is bound by the law to her husband as long as he lives. But if the husband dies, she is released from the law of her husband.” (Rom. 7:2 New King James Version)

As divinely designed, Paul teaches clearly that only death can separate the couple who are bound by God’s laws. “Till death do us part!” goes their solemn vow. And the two ought to recognize the authority of God’s law over each other’s whims and wishes, thus:

No to divorce
True Christians or members of the true Church Of Christ understand fully well that so long as a legislation does not run counter to a divine mandate, they are duty bound to obey them, thus:

“Submit yourselves for the Lord’s sake to every authority instituted among men: whether to the king, as the supreme authority, or to governors, who are sent by him to punish those who do wrong and to commend those who do right.”
(I Pet. 2:13–14 New International Version)

Otherwise, God’s will prevails, as when our Lord Jesus Christ resolved the issue on divorce, thus:

“Some Pharisees came to him to test him. They asked, ‘Is it lawful for a man to divorce his wife for any and every reason?’ ‘Haven’t you read,’ he replied, ‘that at the beginning the Creator “made them male and female,” and said, “For this reason a man will leave his father and mother and be united to his wife, and the two will become one flesh? So they are no longer two, but one. Therefore what God has joined together, let man not separate.”’ ‘Why then,’ they asked, ‘did Moses command that a man give his wife a certificate of divorce and send her away?’ Jesus replied, ‘Moses permitted you to divorce your wives because your hearts were hard. But it was not this way from the beginning.’” (Matt. 19:3–8 niv)

To close the issue, Christ declared with finality:

“And I say to you, whoever divorces his wife, except for sexual immorality, and marries another, commits adultery; and whoever marries her who is divorced commits adultery.” (Matt. 19:9 nkjv) 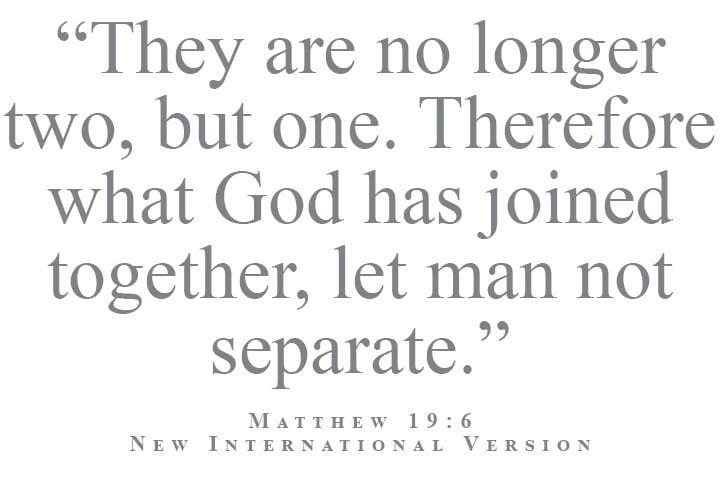 The adulterer’s lot
Adultery is not to be dismissed lightly. Addressing the Christians at Corinth, Apostle Paul strongly wrote:

Sad to say, but there are instances when even after all avenues have been exhaustively explored by a couple, they still end up in separation. Still, Apostle Paul admonishes the wife and the husband, thus:

“But even if she does depart, let her remain unmarried or be reconciled to her husband. And a husband is not to divorce his wife.” (I Cor. 7:11 nkjv)

The reward of the obedient
A lawyer may successfully argue his way and win a divorce case, but the biblical truth remains:

“Blessed is every one who fears the Lord, Who walks in His ways. When you eat the labor of your hands, You shall be happy, and it shall be well with you. Your wife shall be like a fruitful vine In the very heart of your house, Your children like olive plants All around your table. Behold, thus shall the man be blessed Who fears the Lord.” (Ps. 128:1–4 nkjv)

This reiterates what the Psalmist sang, thus:

“Blessed are the undefiled in the way, Who walk in the law of the Lord! Blessed are those who keep His testimonies, Who seek Him with the whole heart! They also do no iniquity; They walk in His ways. … Then I would not be ashamed, When I look into all Your commandments.” (Ps. 119:1–3, 6 nkjv)